It’s good to be back baking. I took a long break after elbow surgery in December. Now I’m recovered from surgery, working from home and ready to be baking from Dorie’s cookbooks again.

Along comes Easter and even though we can’t have a large celebration, dessert must be made! This tart, one of the selections for this month’s baking from Baking Chez Moi for Tuesdays with Dorie, is a perfect choice when you have limited ingredients on hand. If you have the basic baking essentials plus apples and lemons, you’re good to go.

The crust of this tart is a sweet tart dough, one of Dorie’s basic recipes. I’ve had trouble with this one in the past: it cracked when I tried to put it in the tart pan after the one hour rest in the freezer. This time, I was patient and made sure to let the dough soften longer after it came out of the freezer. The recipe suggests the dough may be soft enough after ten minutes. Twenty minutes was better for my dough. There was still some minimal cracking, but it was easy to patch. Also, sweet dough burns easily. I baked at 375 degrees instead of 400 and took it out after 20 minutes.

The filling consists of sugar infused with lemon. You rub grated lemon zest into the sugar with your fingertips. Eggs go in, then lemon juice. Grate the apples either by hand or in a food processor (my choice.) Add those in, add melted butter, pour it in the crust and the tart’s ready for the oven. Forty minutes later and you have a light, elegant and delicious end to your meal. Leftovers go in the fridge. The tart is great the next day cold and is even more lemony. 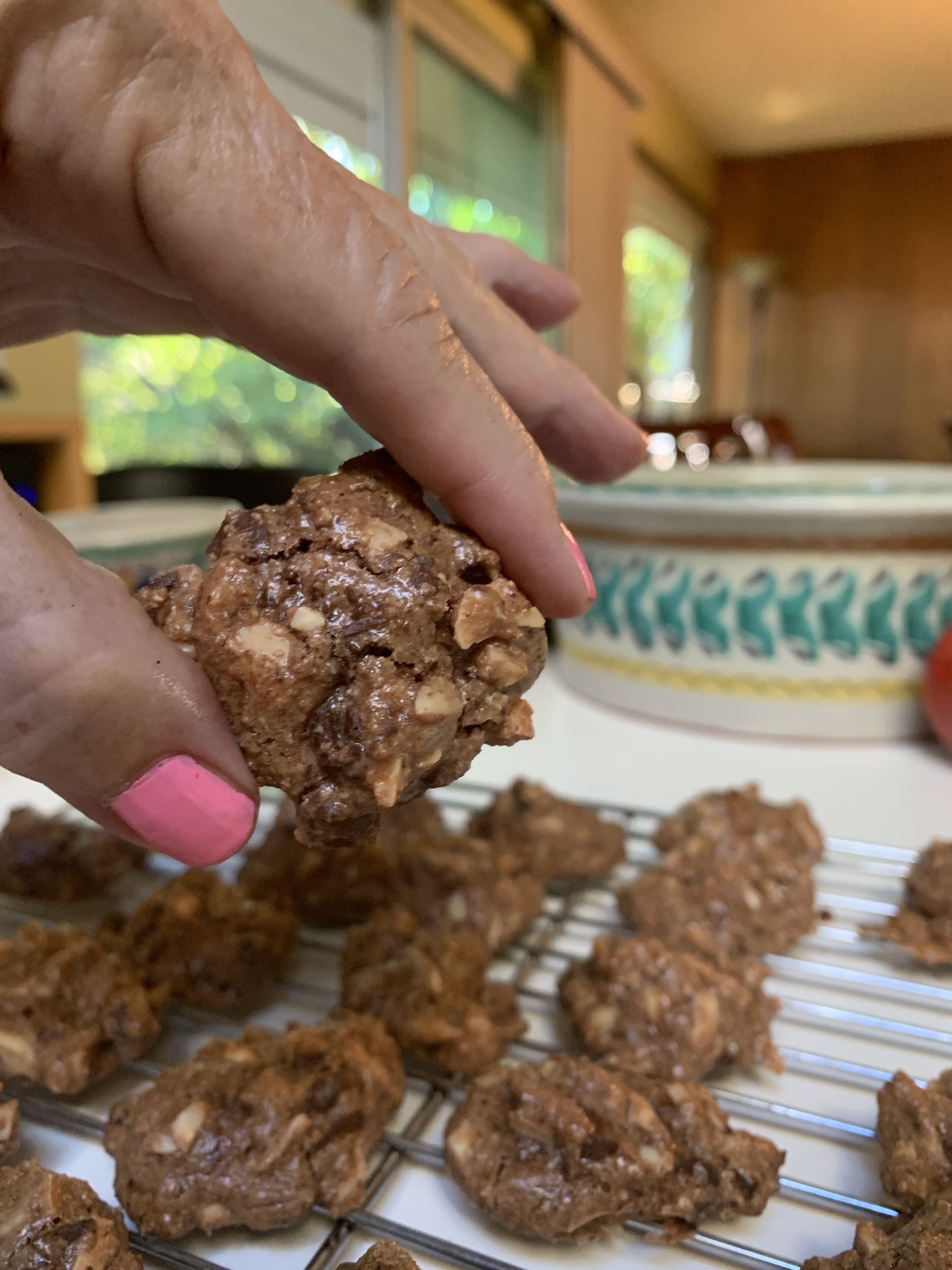 They may not be photogenic, but these little “uglies” are delicious. This recipe takes almost no time to make and it’s gluten free.

The dry ingredients (cocoa, almond flour, confectioners sugar, cinnamon, sea salt) are sifted together onto parchment paper. Two egg whites get beaten in a large bowl until foamy, then vanilla goes in. Using the parchment as a funnel, the dry ingredients pour in easily to the egg whites, along with toasted, chopped slivered almonds. Finally, chopped bittersweet chocolate is mixed in. (I finely chopped bittersweet chocolate chips.) Dropped by tablespoons onto a parchment lined insulated baking sheet (or use two baking sheets stacked together as I did), the cookies take about 20 minutes to bake.

By the next day, the cookies were chewier. Dorie says they get hard after a few days. I doubt we will have any left over to find out for sure.

So lovely and delicious, this impressive tart is actually easy to make, especially if you get the tart dough going the day before you put the tart together.

I chose to make Dorie’s chocolate tart dough for the crust. It formed a nice moist dough that rolled out well. I followed Dorie’s instructions and rolled the dough three inches larger that the tart pan bottom. 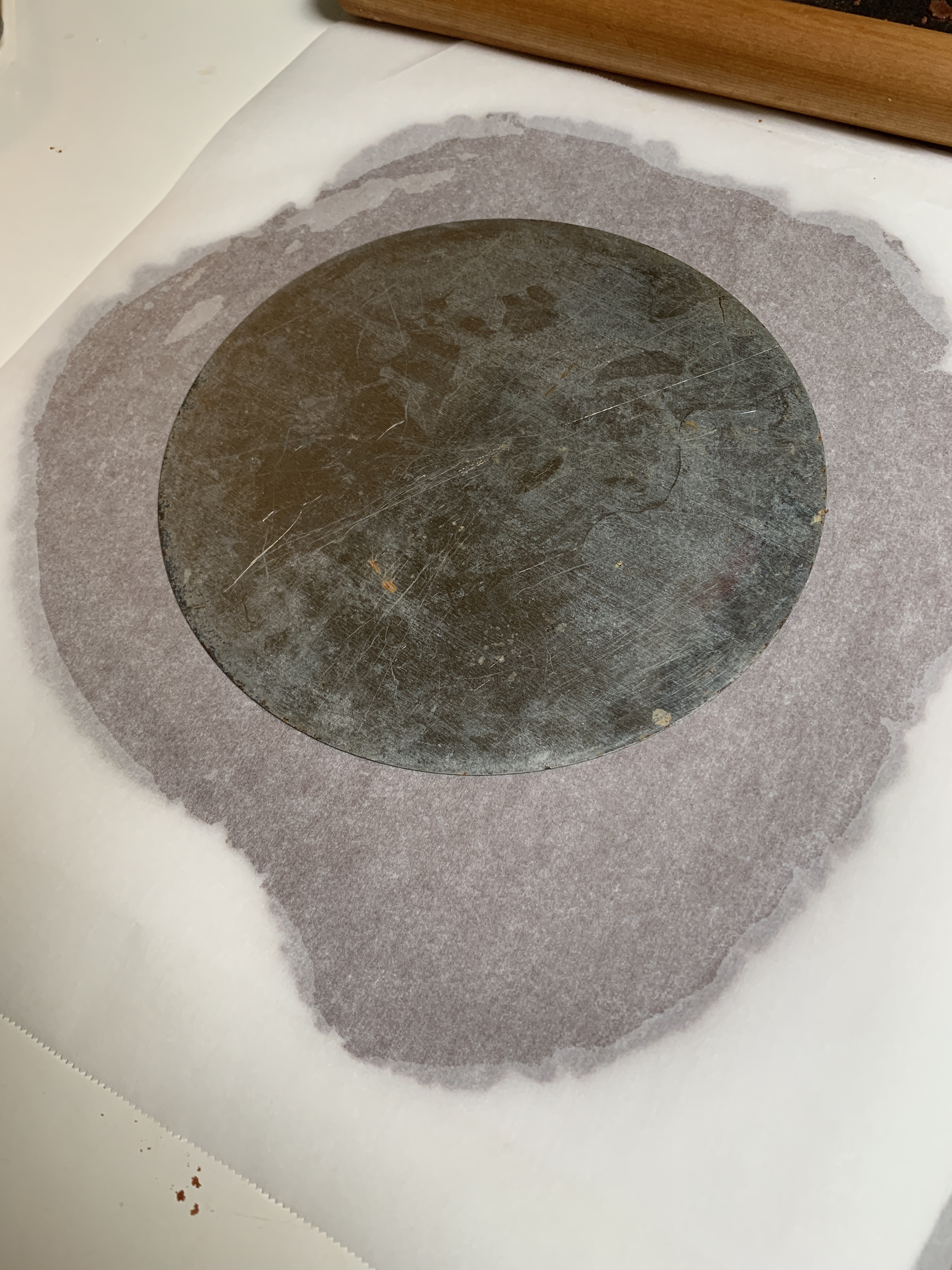 I froze the rolled out dough, then took it out after a couple of hours and let it soften for ten minutes before putting it in the tart pan. I obviously did not let the dough sit out long enough before fiddling with it: the dough cracked in two when I picked it up and cracked even more as I tried to mold it up the sides of the tart pan.

But time heals all wounds. And cracks in tart dough as well. As the dough softened up, I was able to patch the cracks and create a cohesive shell:

After an overnight in the freezer, the shell was ready to bake. Twenty-five minutes in the oven covered with a piece of buttered foil, followed by about five more minutes without the foil. Now for the filling.

I brewed espresso and added rum to taste and let the mixture cool to room temperature. Meanwhile I loosened up some Marscapone in a large bowl using a rubber spatula. Next, I whipped egg whites and a pinch of salt then slowly added sugar to make a marshmallowy meringue. I then whipped egg yolks and sugar until the mixture turned a pale yellow. The egg yolks went into the Marscapone, followed by the egg white mixture, very gently folded in.

I had already laid out ladyfingers in the tart shell to see how to best fit them in, then removed them. A thin layer of the Marscapone went on the bottom of the shell. Then dipping each ladyfinger in the espresso-rum mixture, I added them back to the tart shell.

The rest of the Marscapone mixture went on top, smoothed with a small offset spatula. I chilled the tart until serving time. 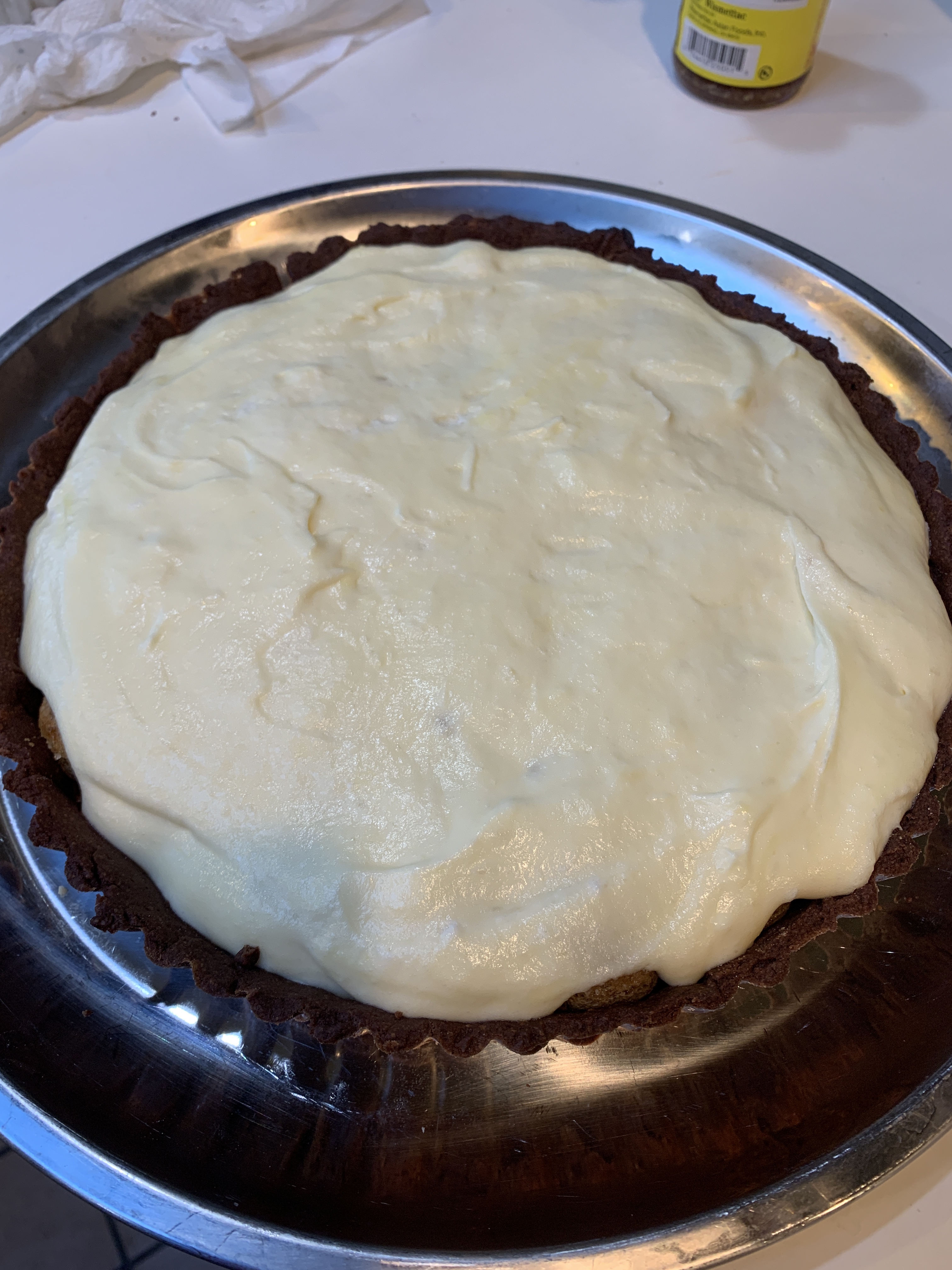 Because we wouldn’t be eating the whole tart in one day (ha ha), I sprinkled our individual servings with shaved bittersweet chocolate after cutting them. The tart is delicious with a subtle, not-too-sweet flavor. The chocolate shavings added a slight crunchiness which gave the tart an interesting texture. It would make an impressive ending to a dinner party. In our house it was extra special treat after a Sunday family dinner. 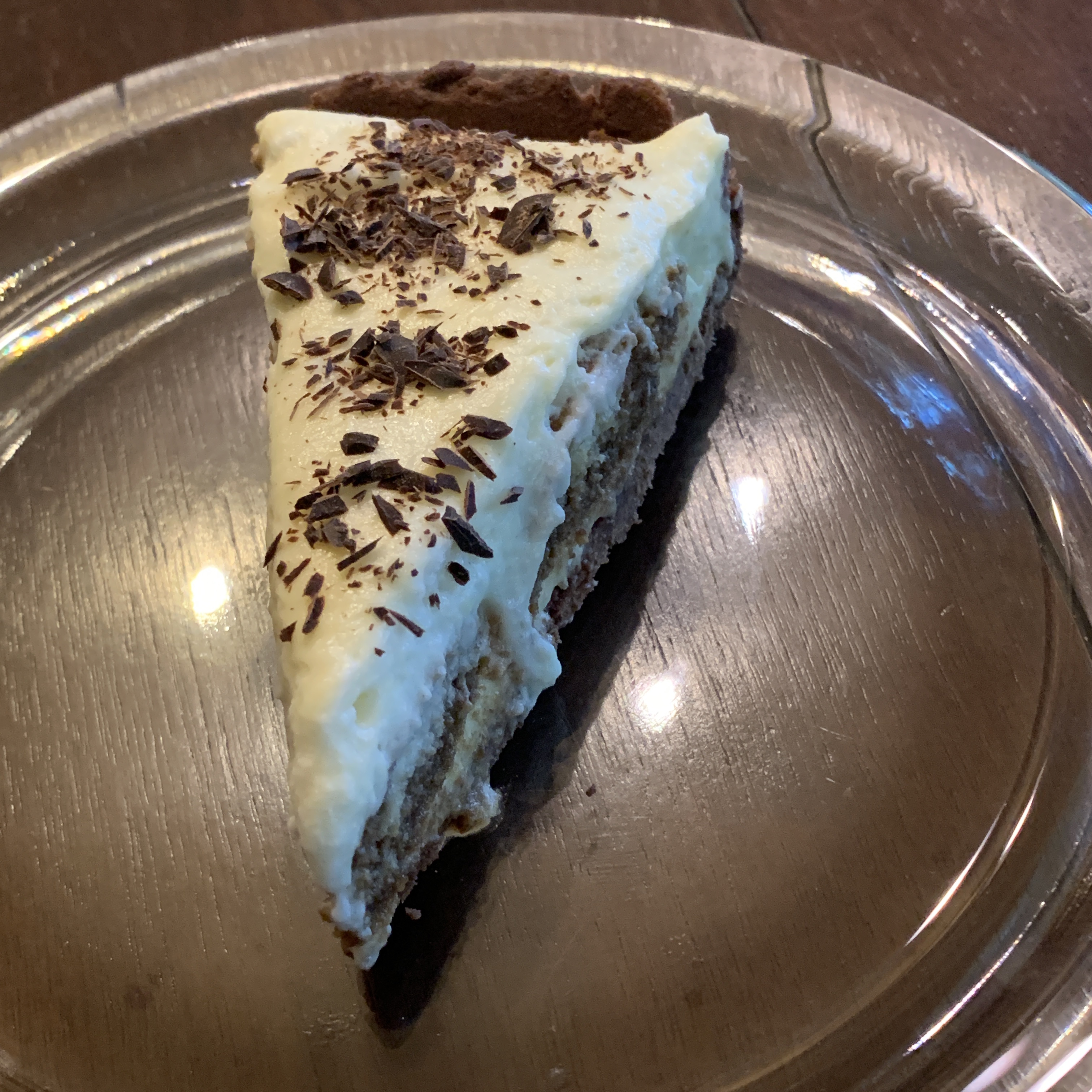 When reading over this month’s choices for baking from Dorie’s Cookies, I noticed Dorie’s suggestion that Melody Cookies make great ice cream sandwiches. My son is in town and I realized homemade ice cream sandwiches would make a perfect finish to his birthday dinner.

I made a half recipe of the dough and we went off to the store to get the ingredients for the rest of our meal while the rolled dough chilled in the freezer. (By the way, when my fridge went on the blink recently, I got a new fridge that has a pastry drawer in the freezer.)

I used a two-inch round cookie cutter. I forgot the sugar sprinkles on top of the first batch to go in the oven, so those cookies became the bottom of the sandwiches. After everything cooled, I used a medium cookie scoop to scoop softened vanilla ice cream onto the bottom cookies and gently pressed it down with the top cookies. A small offset spatula helped push in extra ice cream between the two cookies where needed.

Need I say it? Delicious!

A creamy and delicious alternative to the classic chocolate mousse, one I’m sure will be added to favorite desserts for company. It comes together very quickly, although you must allow for time to let your egg whites come to room temperature and three hours of chilling time. Well received by the family! 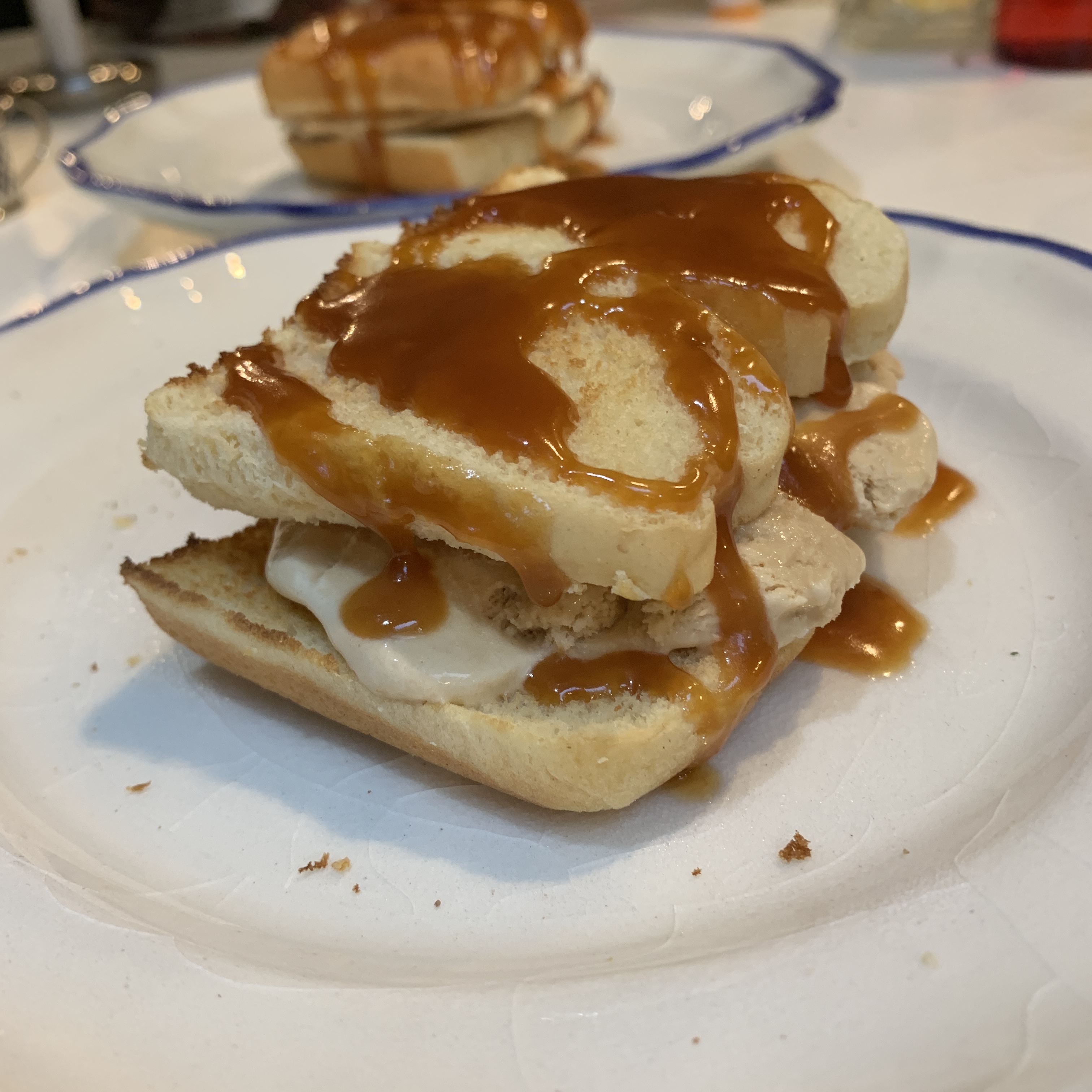 Inspired by my fellow Tuesdays with Dorie bakers, I used purchased brioche instead of baking my own brioche from scratch for this dessert. I had leftover brioche hot dog buns on my kitchen counter and coffee ice cream in the freezer, so all I had to do was whip up some caramel sauce. No one cared that the sandwiches weren’t round. The caramel goodness of the sauce, the slight crunch of the toasted brioche and the coffee ice cream combined to make what my son’s girlfriend called “the best thing I’ve ever eaten.” Followed by my son’s query, “What are we going to do with leftover caramel sauce?” 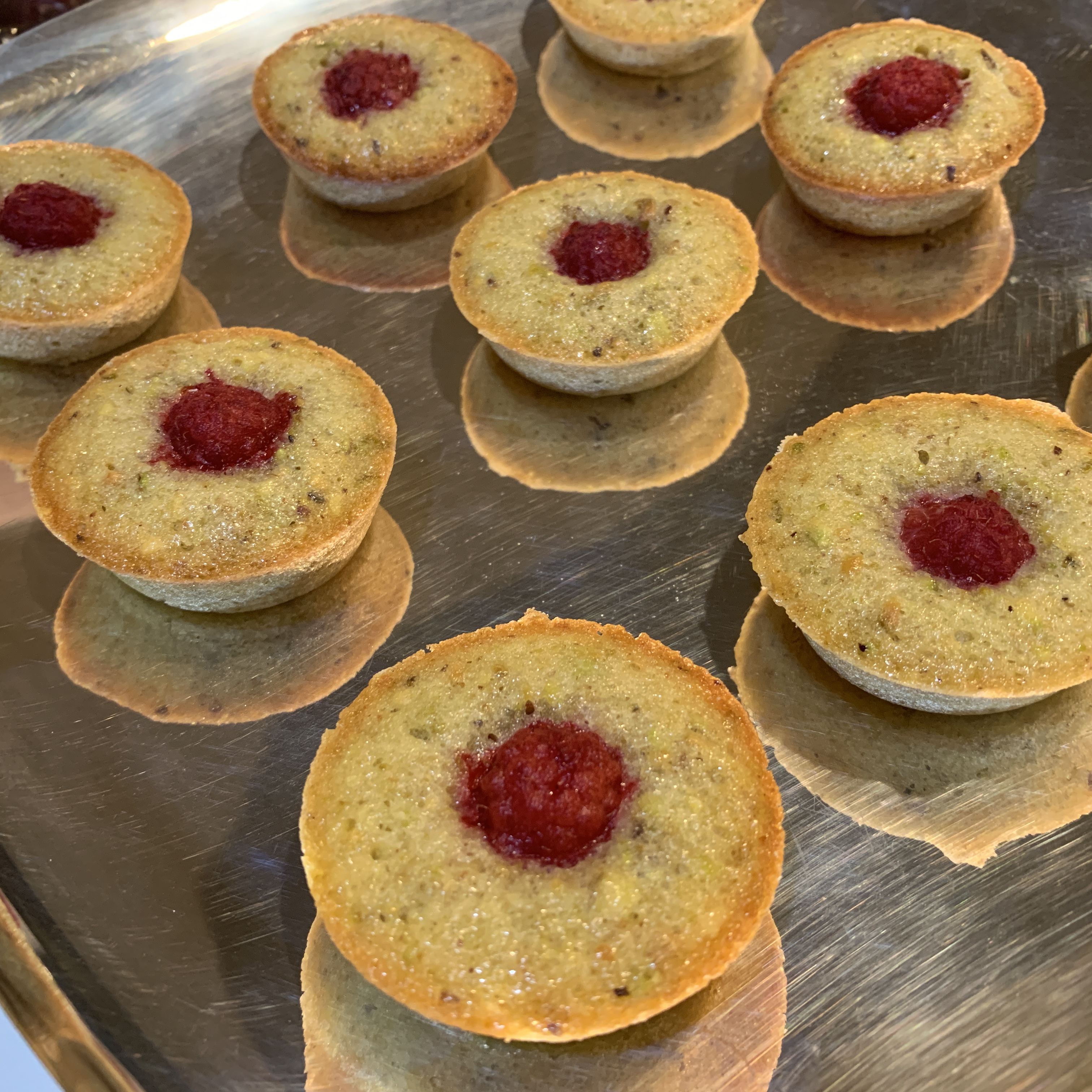 These tiny cakes are one of Dorie’s versions of financiers in Baking Chez Moi, a blend of ground nuts, egg whites, flour, and butter. Here, the nuts are unsalted pistachios. Traditionally tiny rectangular loaves, Dorie suggests using mini muffin tins in case you don’t have a financier pan in your cupboard.

The unusual batter comes together quickly. Sugar and pistachios blend together in a food processor until the nuts are in small pieces. This mixture gets added to slightly beaten egg whites, then flour and a pinch of salt go in. Finally, one and half sticks of melted butter is gradually blended in, creating a very sticky, almost gluey batter. The batter must chill in the refrigerator for eight hours before baking, so plan ahead!

When ready to bake, butter and flour a mini muffin tin. Fill the cups about halfway and push a raspberry in the center of each one. Mine were done after twenty-four minutes, with the pans turned after twelve. I made twenty-four financiers, put the rest of the batter in the fridge and made eleven the next day.

The subtle pistachio flavor melds with the sweet raspberry to make a delightful treat. The texture adds to the enjoyment: the edges are crispy and the interior spongy and moist. These were a hit with my family: my husband and I, my mom, and my son and his girlfriend, home for a visit. A new favorite! 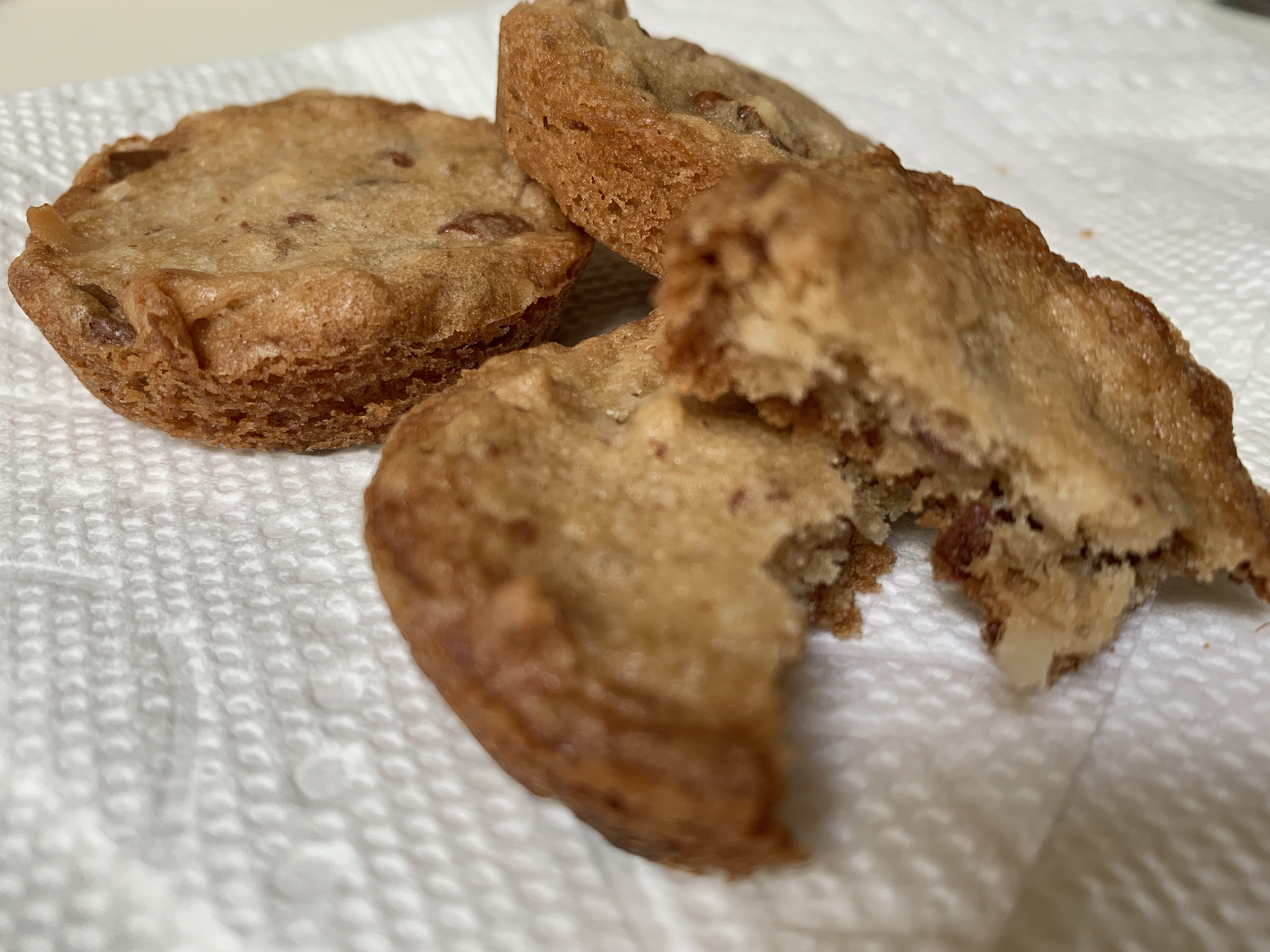 Blondies are typically baked as bar cookies, but Dorie’s recipe elevates them to uniformly round cookies with a crispy edge. (Bar cookies are an option as well.) The goodies in these cookies are chopped toasted pecans, sweetened shredded coconut and chopped milk chocolate. The dough gets dolloped into a mini muffin tin, which provides the crispy edge to the cookies. I had leftover dough after filling my tin so I made drop cookies with the remaining dough. Both versions of the cookie were great, but I liked the look of the cookie disks that emerged from the muffin tin and preferred the thickness and crunchiness as well.

These not-to-sweet airy cream puffs are delicious plain, or can be a starting point for a luscious filled dessert. The cream puff is topped with brown sugar dough disks that meld into the cream puffs as they bake, creating the crackle-top. I first tasted these treats at Dorie’s book signing in Seattle, where I first learned about Tuesdays with Dorie. And so my baking adventures began with this treat.

The components are fairly simple. First, a brown sugar cookie rolled, chilled, then cut into one and a half inch disks, then chilled again.

Next, the cream puffs. Mix milk, water, sugar and salt in saucepan and bring to a boil over high heat. then add flour and cook on medium low and stir, stir, stir until a smooth dry dough forms.

Then transfer the to a stand mixer, and add four room temperature eggs, mixing one at a time until you have a shiny dough.

The dough is easily measured onto baking sheets with a medium size cookie scoop and the disks of brown sugar dough are placed on top. I had just enough dough for 24 cream puffs. There were extra brown sugar disks so I followed Dorie’s suggestion and baked them as cookies. Bonus treat!

We tasted the cream puffs (delicious!) and I froze the rest in anticipation of summer guests. I can pull these out of the freezer, heat in the oven for five to eight minutes and fill them for a quick and tasty dessert. 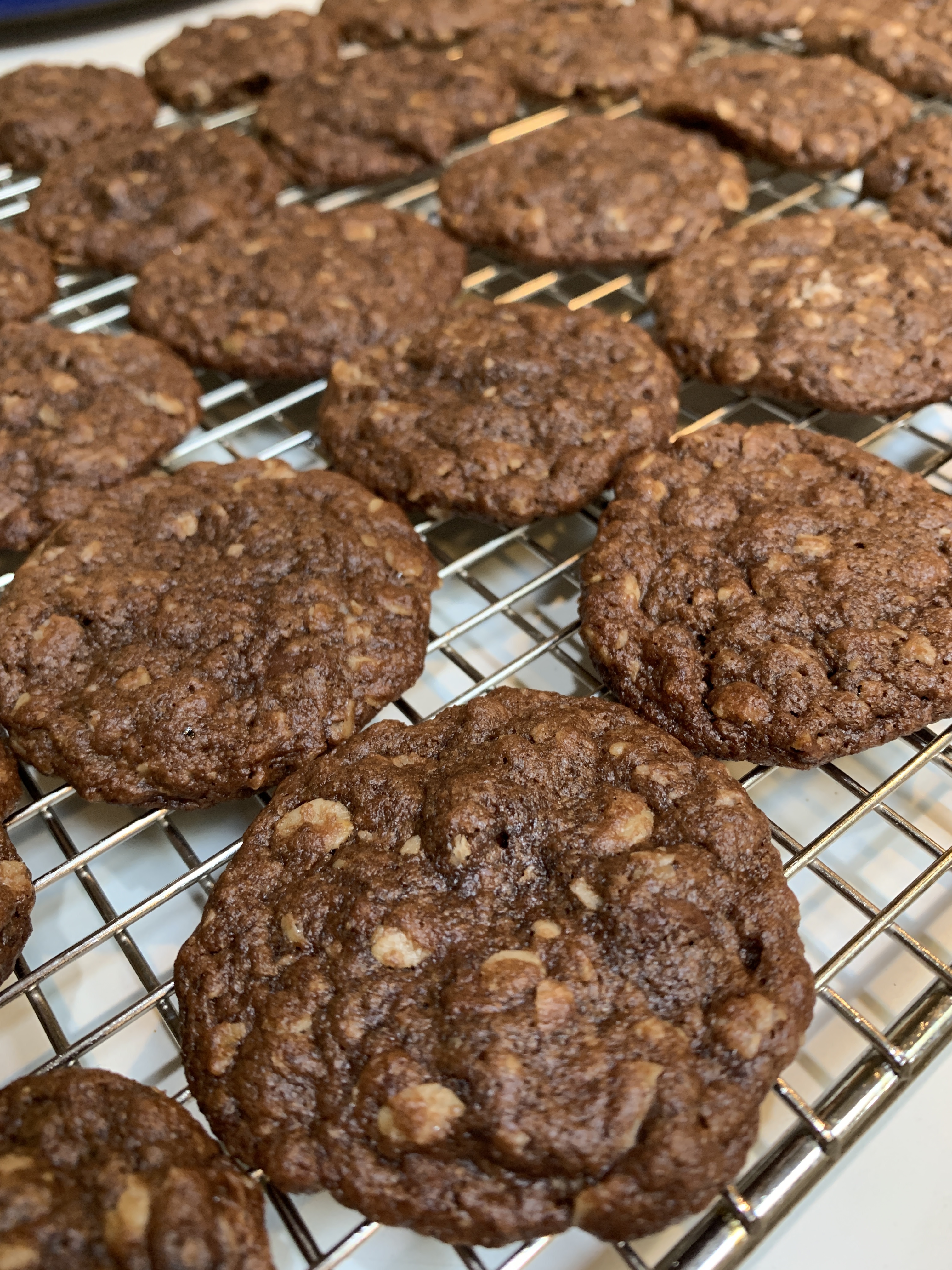 Fresh out of the oven, these cookies are reminiscent of the no-bake “Fudgies” that were the much-anticipated treat in school cafeteria hot lunches. As they cool, they get crispier, perfect companions for tea, coffee or a glass of milk.

Old-fashioned oats give the cookies a chewy texture. Cocoa powder and chocolate chips make them chocolatey and Biscoff spread is the “secret” ingredient. The dough is very sticky before its stay in the fridge. Be sure to allow two hours chilling time when you are planning your bake. After chilling, the dough is rolled in small balls then flattened with the bottom of a jar or glass covered in plastic. Mine tended to stick to the jar after a while; I managed to pull them off without misshaping the cookies.

I brought these on a getaway with friends. What gathering of women friends would be complete without chocolate?